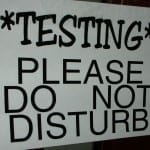 I believe there is a grand change going on in online advertising.

We do things now that we’ve never done before. We are very critical of our email and its delivery and the reason is because email is getting blocked faster than it ever has been in history.

We’re still doing fine with ours, we have a great delivery rate thanks to several services like EmailDelivered.com, which is owned by Heather Seitz. They help us get our emails through and keep us white listed. But direct email is only one marketing source.

Typically people only use the big three — Google, Yahoo or Bing. That’s just not going to cut it anymore. The reasons vary…

Google itself is dangerous for anybody right now. Someone asked me not too long ago, what’s the best way to advertise on Google and I said don’t do it. They asked me why and I told them, because they’re too volatile. I don’t want to put a lot of time and effort into something just to know that I’m ultimately going to get banned.

Sure, I could tell you the ways to get yourself approved and stay clean on Google, but it’s a lot of work and there’s always that risk.

I hate the idea of having to look over my shoulder to see whether I’m doing it right or not. You’re an advertiser, and I want to buy space with you, take my money and let me advertise but don’t tell me how to run my business which is what Google has been doing.

With Bing and Yahoo, there’s still opportunity there, but the problem is getting enough clicks. It’s more difficult to get clicks on Bing and Yahoo than it has been on Google.

In our company, we are always testing and tweaking ways to break through advertising barriers in order to get more traffic for whatever it is we may be doing, but it’s a lot of work so what you want to focus on is outside advertising sources.

What I mean by outside advertising sources is ad networks and there are a ton of them out there.

I keep what I call my secret bookmark list, which is simply a list of bookmarks that I add to every day. I find new places to advertise as I surf the Internet.

If I see someone serving an ad and I want to find out where the ad is coming from and see if I can advertise there, I bookmark that and test it repeatedly.

Driving traffic is actually easier on these ad networks because you simply buy space, pay the money and they send you traffic.

Do this right now…go to Google and type in the words ad network. You’ll find a day’s worth of work that you could do finding various places in which to advertise.

I look everywhere I go, whether it’s new sites, a social network of some sort or whatever. If I see they’re using a different form of advertising, then I’ll backtrack to find out where the ads are coming from, pull up the site to see what it looks like and whether it’s possible for me to advertise there, as well.

This gives me a huge range of advertising sources, which in turn means choices. When you have a plethora of places where you can advertise, it gives you the advantage of having multiple sources of traffic, and that’s a huge advantage.

One of the biggest differences between a person beginning in the world of Internet marketing and one that’s been around for a while is that, as veterans we know how to limit and direct our choices in a very positive way.

You may be new as far as advertising and marketing goes, so you just don’t know where to go for advertising, so your choices are limited.

Whereas, I know where not to go which rules out a lot of places. I know where I should be looking and that opens up a world of choices to me.

The more choices you have when it comes to advertising, the better position you’re actually in, so start looking at alternative sources of advertising.

Know that I’ll try anything once, especially if it doesn’t cost me a lot of money.

I placed an ad on an ad network that started recently. I was messing around with it just to see what would happen. I threw a product up there, set up the campaign and monitored it.

I’m not talking about huge results because I always limit my campaigns, meaning I’ll put a $5 or $10 limit per day when I start out. I don’t spend hundreds of dollars to test an ad source. I’ll usually test a system with whatever their minimum requirement is.

When I test, I am looking at some very specific things.

I want to know everything, and I don’t want to risk a lot of money in the process. So when you’re trying out new advertising sources, don’t blow everything you’ve got in the first couple of days testing out 20-30 different elements. You want to limit the amount of money you spend and therefore, you limit your liability.

You may have money to spend, but that doesn’t mean you have to spend it all testing. Test safely and then spend more money on the sources that deliver the best results.

A lot of people have what I call the Ricky Bobby syndrome, which means they want to go fast. Sometimes fast isn’t good because that allows you to make mistakes that you wouldn’t have made if you had gone slower and taken your time.